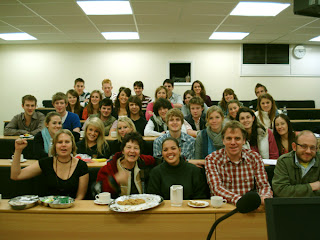 32 students from the geography department at are off to on a field trip in April. Rock around the Blockade was very excited when one of the students contacted us to ask if Yoselin could come and speak to them during the speaking tour. Congratulations to the tutors, Heather, Ian and Keith, who are organising the trip and encouraging and supporting the students in learning about all aspects of and the Revolution before they go and aiming to set up interesting and varied visits when they get there – we had lots to discuss.

Before we sat down to discuss the project itself, an open meeting had been organised with more people than just the students going to . Yoselin described the education system in and the municipalisation of university education in this period, the Battle of Ideas. The incredible opportunities for study that are available to young people in Cuba was very clear, in the context of a poor country under siege from imperialism and the US blockade and yet still able to provide education for free with books, accommodation and living costs covered for all students. , whose internationalism is well known with doctors, nurses, teachers and engineers abroad, also gives the opportunity to students from abroad, who would never otherwise have had the opportunity to study, to come to to study for free, currently numbering 25,000. When Cuba was plunged in to the Special Period after the collapse of the USSR and the sudden loss of trade, Yoselin described how one idea floated by students was that families who could afford to pay for university education for their children should do so, after discussion at various levels and in many forums, the national assembly overruled this proposal saying that university education should remain free for everyone.

What a stark contrast to , the fourth richest country in the world, where mounting student debt is preventing many young people from further education and foreign students pay exorbitant fees.

Yoselin discussed the planning of their society in terms of which sectors of society people are needed in and the guarantee of work. She also outlined the representation of young people and students in the process of decision making as delegates to the municipal, provincial and national assemblies. Approximately 25% of delegates elected to the national assembly are under the age of 30 and there are four students among the 31 members elected to the highest collective decision taking body, the Council of State.

Questions raised from the floor included themes of dissidents, democracy, journalism and free speech, US elections and the lifting of the possibility of the lifting of the US blockade, the current situation in Latin America, the effect of tourism and tourists on the ideas of the Revolution, the importance of young people and what Yoselin had learned from being part of the speaking tour. 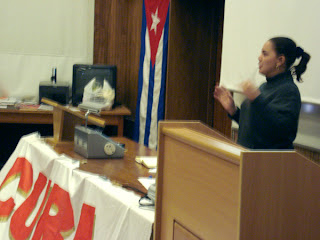 Yoselin, standing at the front of the lecture theatre, with a banner saying Cuba, socialism into the 21st century in front of her, and under a map of Cuba projected above her, was energetic, enthusiastic and proud in her answers, defending their process of building socialism, aware of the problems they have and the difficulties they face and clear that the majority of Cubans stand together with the aim of solving their problems and improving their society for everyone.

Yoselin described the process of decision making in , the discussion and debate and therefore the redundancy of critics of who say there are only three or four newspapers and that is restrictive. She described the farce of the elections and that the outcome was very unlikely to make any changes towards and that the has various plans for destroying the Revolution in and has only ever conceived of lifting the blockade with unacceptable conditions attached. will survive, Yoselin assured us. Yoselin spoke of the role of young people in society and the combination of work and study that involves young people and gives them responsibilities and roles to play. There was an extensive discussion about the role of tourism and it is clear that is aware of the negative aspects of tourism, the role it can play in undermining the process of building socialism and the problem of the dual currency. This is an aspect of the development of Cuban society that Cubans are continuously trying to find ways of addressing while acknowledging that they need hard currency and need to survive.

Yoselin said that visiting Britain had been an incredible experience, saying that in Cuba they see their problems in a different context to us in Britain and to have had the opportunity to listen to people living under capitalism, to see the extremes of wealth and the difficulties for those with less, the have her voice heard by over 2,000 people from all walks of life and from school students to retired people, was an experience she will never forget.

Yoselin rounded off that session by describing the warmth and care between neighbours in Cuba who are forever in dialogue with each other, call out to each other in the street, support each other and live together as a community, versus what she has seen in Britain where some people don’t even know their neighbours and daily life can be a very isolating experience.

Thank you to Exeter University for inviting us down and we look forward to coming back after the field trip to Cuba and to ongoing links with Rock around the Blockade in the future.